CEBU CITY (April 15, 2015) — The Cebu Provincial Government has commended Taiheiyo Cement Philippines, Inc. (TCPI) for regularly attending to the health needs of San Fernando residents, especially those in the hinterlands who hardly get medical attention.

The commendation for TCPI with Solid Earth Development Corp. (SEDC), its supplier for earth materials and port operator, and volunteers came through a resolution that Cebu Provincial Board Member Arleigh Jay C. Sitoy had authored. 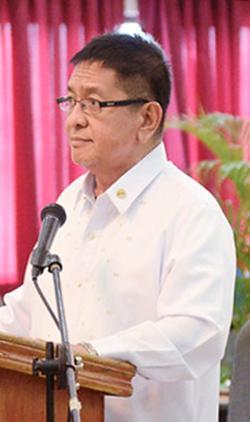 The Sangguniang Panlalawigan members unanimously adopted SP Resolution 573-2015 last March 9 during their 8th Regular Session at the Capitol that Cebu Vice Gov. Agnes Almendras Magpale presided. All but one PB member was present during the session.

TCPI and SEDC have been sending medical missions since 2006 three to four times a year under their joint Social Development management Program (SDMP) to at least 12 stakeholder barangays, nine of them in the uplands of San Fernando.

The missions have already attended to more than 17,220 patients at the time the provincial legislature passed the resolution, and have already visited the 12 barangays twice since, according to Eng’r. Nilo R. Yap, TCPI corporate affairs division senior manager.

The mission started its third round when it went to Barangay Tonggo last March, five days after PB Member Sitoy presented the resolution on the floor of the local board in session.