One Oasis Cebu 5th bldg 2 months ahead of schedule

CEBU CITY (Oct. 10, 2015) — The fifth mid-rise building at One Oasis Cebu is two months ahead of schedule, disclosed Filinvest Land, Inc. (FLI) as it announced having sold out the remaining inventories of the cluster’s first four buildings.

This developed as the company marked another milestone for the project today with the first concrete pouring ceremonies for the fifth mid-rise building at this premier resort-themed residential cluster in midtown Cebu City.

“We have turned over all units that have been ready for occupancy at the first four buildings and we are pleased that we have started to pour concrete with the fifth one,” quipped Igot.

“More than that, we are two months ahead of construction schedule. This is encouraging because the demand for a home at One Oasis Cebu continues to be overwhelming,” he added.

An Asian-Balinese-inspired community in a sprawling 3.7-hectare property in Barangay Kasambagan, One Oasis Cebu is planned for 10 mid-rise residential condominiums and is now becoming a landmark in the city.

All its amenities that include a resort-designed swimming pool, clubhouse, basketball court and landscaped open spaces that comprise 60 percent of the whole land have been completed and now enjoyed by the residents.

Igot attributed the growing uptake at One Oasis Cebu to the completed amenities that makes it an inherent getaway and a refreshing haven “with tranquility and serenity that some of the world’s best resort destinations provide.”

He said investors who acquired units for lease could attest they have had these handled by the Filinvest Property Management Team that also maintains the properties and keeps these and the leasing occupants secured.

“A secure environment with guarded gates and perimeter walls, residents are assured of utmost order and round-the-clock security, also confident that their kids can play safely in the neighbourhood,” he noted.

FLI broke ground for One Oasis Cebu’s fifth building last July and is expected to turn over the units to its future homeowners by the first quarter of 2018, Igot disclosed.

Also called Fairways II, it boasts of scenic views of the golf course on the west side and the central amenities facing east.

By nightfall after the ceremonies, FLI hosted the brokers with their agents and prospective buyers to a Casino Royale Night at the One Oasis Cebu clubhouse. Closed transactions was beyond expectations, it was learned. 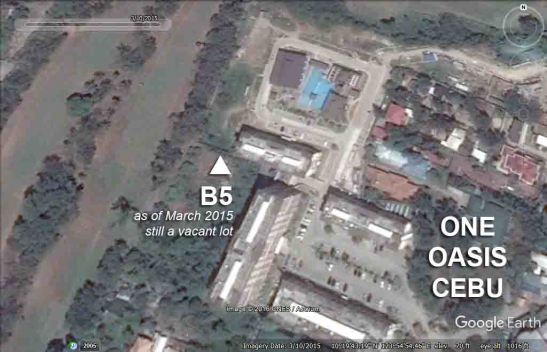 THE SITE of One Oasis Cebu B5 is shown (above), still a vacant lot as of March 2015; and the progress (below) a year after by March 2016, just two months after the subsequent topping-off ceremony.