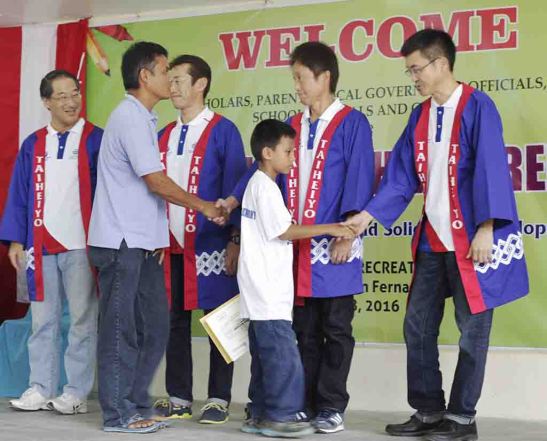 Scholars increase to 72 with the start of K-12

SAN FERNANDO, Cebu (June 18, 2016) — Taiheiyo Cement Philippines, Inc. (TCPI) has expanded its scholarship program, increasing the number of beneficiaries from 62 to 72 as schools in the country started to implement the K-to-12 basic education program.

TCPI with its materials supplier Solid Earth Development Corp. (SEDC) opted to continue to sponsor the schooling of those who have moved up from Grade 10 to Grade 11 in senior high school (SHS) this school year until they finish Grade 12.

“It is our commitment to see through the complete education of our scholars,” declared Satoshi Asami, TCPI president and CEO.

As this developed, the two allied companies started to expand the number of secondary level scholars per batch from 12, representing their 12 stakeholder barangays, to 13 starting with the current Grade 7 batch with the inclusion now of Barangay Tubod. 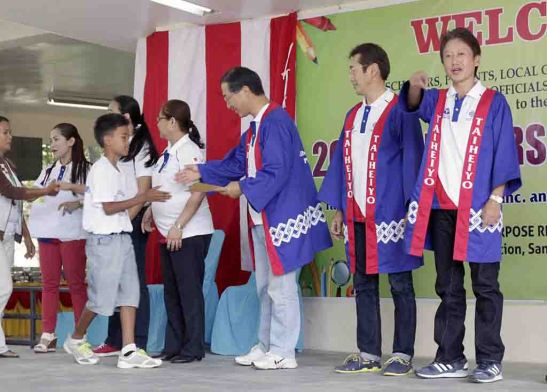 The scholarship program also continues to maintain the remaining 11 college scholars following the graduation last March of three of them who TCPI absorbed as new employees, according to Mitzie Almira I. Carin, who handles the scholars.

The three are Cristy C. Paypa and Karen Dave G. Mamugay, who finished BS Management Accounting at the University of San Jose Recoletos (USJR); and Gabriel V. Canque who graduated as Mechanical Engineer.

Municipal, barangay and school officials and the scholars’ parents witnessed the ceremonies, the twelfth since the program started in 2005, at the multi-purpose recreation center of the TCPI plant in South Poblacion. 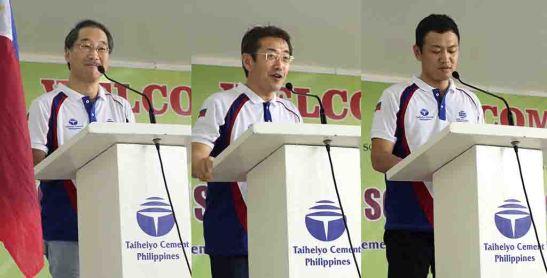 In his message, Asami underscored that “education is the foundation to build a better future. (It is important) for its economic value and in nation-building.”

“Study hard, please, be ambitious and head on to your dream,” Ichizawa, also the TCPI plant manager, urged the scholars in his opening message, pointing out to them that “you are the treasure of your family, the hope of your barangay, the asset of your nation.”

Sakakibara, also the chief technical adviser of SEDC, told the scholars that “hardships come along the way (and that) challenges, trials and failures are facts of life.”

But he added that such “should not hamper you from picking up the pieces and start again. You should not feel bad if you fail. Instead, you should welcome it as an opportunity to begin something again more wisely.”

In response, Christine B. Villarias, a Grade 9 first honoree now in Grade 10, acknowledged the scholars’ “support network,” including TCPI, SEDC, the partner schools, barangay leaders, their parents, the rest of their families, and God.

She also reminded her fellow scholars that “the road to success is always under construction.”

BS Computer Engineering junior Rodrigo Saronio Jerosalem of Balud said they are “obliged to have high grades and to graduate with honors” because their privilege as scholars is “one in a million, an opportunity that is making us achieve our dreams.”

Now a mechanical engineer, Canque shared that he managed to focus with his studies through college as he did not have to worry about tuition fees and other educational expenses because of the scholarship he had.

Hired by TCPI in a job he had all wanted, he quipped on Confucius who once said, “Choose a job you love, and you will never have to work a day in your life.”

Also hired by TCPI as a customer service attendant, Mamugay advised the scholars to “never give up” when faced by challenges in their studies.

“It doesn’t matter how many times you fall down (for) as long as you know how to get up and move forward,” she said as she reminded them that “life is a matter of choice. Every decision you make (determines) the course of your future.”

Evaniza Genilla, parent of Grade 11 scholar Rhea Mae of Cabatbatan, praised the heavens as TCPI and SEDC extended the scholarship program to SHS even if her daughter chose a school outside San Fernando.

Dr. Imelda V. Canoy, principal of Sangat NHS, encouraged the parents to “have the will and perseverance (for) the children to have the motivation to strive for excellence.”

Carl Vincent C. Catulong of Panadtaran, Janna Caryl A. Bayal of South Poblacion, Jamaica T. Generalao of Tabionan, Grace S. Embolode of Tañañas, Cindy A. Dedicatoria of Tinubdan, James Kobe C. Barnigo of Tongo and Luigi S. Bacalso of Tubod comprise the rest who are expected to graduate from SHS in 2022.

Three came from Grade 9 now in Grade 10. They are Villarias of NDA, Crystal Ann I. Bontilao of Balud NHS and Maria Montessa C. Barnigo of Sangat NHS.

Grade 7 had four honorees who included Jemuel V. Basco of Balud NHS, Kristel Joy G. Pegarido of Magsico NHS, Denice May L. Abella of San Fernando NHS, and Lanie B. Lazo of Sangat NHS. They are now in Grade 8.

With the K-12 implementation, there are no new college scholars.

But the SDMP team hopes to see the completion this school year of Juana Panilagan of Cabatbatan, who took BS Accountancy at USJR, and Deniel Jireh Corpuz of North Poblacion who took BS Mining Engineering at CIT University.

In their fourth year are Johanna A. Sacal and Rhendi G. Catulpos, both of Pitalo and studying at USJR, respectively taking up BS Education (Major in English) and BS Mechanical Engineering; and Mary Luchille G. Lapuz of Greenhills, who took BS Mining Engineering at CIT-U.

Already sophomores at USJR are Nicolino C. Tangente and Jelo A. Pabular of Tubod, both taking up BS Electrical Engineering, and Ma. Lonie P. Redoble of Panadtaran, who took BS Accountancy.

TCPI and SEDC started the secondary scholarship program in 2005, then expanded to the tertiary level by 2009. The high school scholars in every batch represent their stakeholder barangays, while the college scholars are chosen at large.

72 Scholars. TCPI and SEDC offcials pose with their 72 scholars and partner school heads.