Navona. Save for a few more finishing touches, this bloc of townhouses at Navona in Johndorf Communities Calawisan will be ready for turnover to their homeowners.

CALAWISAN, Lapu-Lapu City (July 23, 2016) — Homeowners at the first tranche of Asian-themed townhouses at Navona subdivision may already receive their new homes and start to move in by the fourth quarter of this year, announced its developer.

The first tranche includes around 90 townhouse units of the new subdivision located within Johndorf Communities, a township in this barangay here in Lapu-Lapu City, she disclosed.

With an investment of P250 million, Navona is planned for 431 residential units in four tranches within a 3-hectare property at the 18-hectare township that the company is developing for six subdivisions.

Navona is the fourth after Hanniyah I and II and Astana. They will soon be served by a commercial hub that the company will also develop at the township.

To date, some 70 percent of the planned townhouses at Navona have been sold out, disclosed Bacungan, adding that JVC aims to sell out its inventories before the year ends.

She announced the objective during the recent general assembly with brokers and their agents during which the company also recognized the top sellers in the second quarter.

JVC also introduced a sales promotion for buyers who would earn a P20,000 rebate each if one acquires the loan for the new home within three months from reservation.

A buyer would also earn a P200 Starbucks gift certificate if documents are signed within 24 hours from reservation, according to Bacungan.

JVC broke grounds for Navona in April last year and launched the same by July. It is targeted to complete construction of its housing units by the third quarter of 2017.

Designed with Baroque influence, the subdivision appeals to start-up families, successful professionals, rising entrepreneurs, jet-setting OFW’s and foreigners who are sparking new beginnings in the country.

One may visit Johndorf at the 14th floor of Ayala Life – FGU Center across the Terraces of Ayala Center Cebu, call 266-6190 for inquiries, check about the project on Facebook, or find out more at http://www.johndorfventures.com.ph. 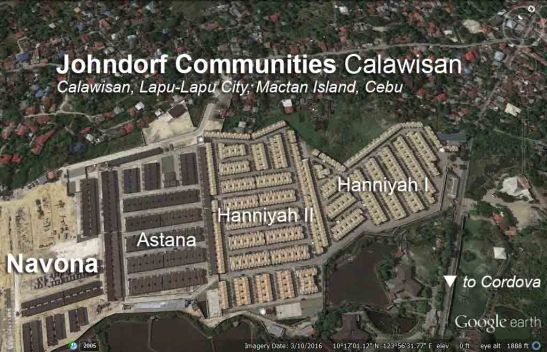 The site as seen on Google Earth two months ago, in May 2016.