Games. An Army reservist and civilian partners facilitate some parlor games with the children.

SEVILLA, Bohol (Nov. 20, 2016) — A civilian-military operation served today 1,969 residents in various barangays in the hinterlands in this town, many of them hardly go to rural or urban centers for needed attention.

The Joint Ready Reserve Battalion of the Armed Forces of the Philippines (AFP) led the Medical, Dental and Civic Action Program (MEDCAP) with the support of Johndorf Ventures Corp. (JVC).

A civilian entity and a property developer, JVC provided manpower among some employees and logistics for the project as part of its corporate social responsibility (CSR) program.

Consultation. An Army reservist doctor attends to a patient.

Physicians attended to 200 patients for medical cases as common cough and colds, fever and hypertension, as dentists extracted some bad teeth from 115 others.

Pharmacy. Sevilla residents line up for their medicines prescribed by the physicians who attended to their medical cases.

The doctors prescribed them with needed medicines that the mission brought along and gave away for free.

At least 97 residents had their hair cut, while 36 others had a soothing massage; as another group of 200 attended the “Value Crafts” seminar, and 27 others on “Violence against Women.”

Lawyers counseled nine residents on legal concerns, with pastors on nine others for spiritual nourishment, and dietitians on 17 persons who needed to either control or improve their diet.

Bad Teeth. The Navy Dental Team extracts a bad tooth from a patient.

Some chemists, psychologists and law enforcers helped 400 youths, young and elder adults appreciate the ill-effects of and consequences in being addicted to drugs and harmful substances.

Volunteers also fed some 600 children, read stories to 155 others, and gave gifts to some 100 more. Most of them participated in the parlor games, as some joined the adults to watch some movies.

A group distributed 170 seedlings and planted them with some residents, Gabison disclosed.

The activity commemorated the 7.2 magnitude earthquake on Oct. 15, 2013 that shook Sevilla, located some 40 kilometers south of the epicenter in Sagbayan town. 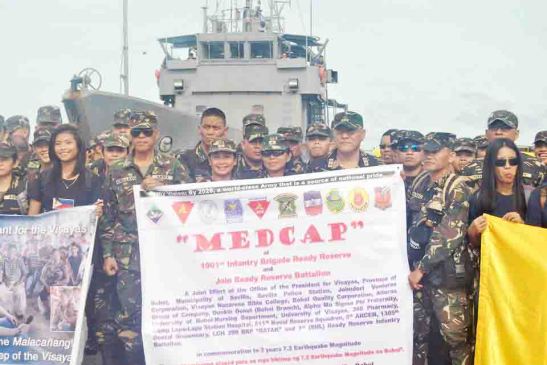