IT has been a tradition of Taiheiyo Cement Philippines, Inc. (TCPI) to clean up and maintain a major waterway that runs through the southern side of its manufacturing facility in South Poblacion, San Fernando, Cebu.

Another multi-sectoral clean-up drive that drew 230 volunteers under the Save Our Seas (SOS) of the government recently generated 1.2 metric tons of garbage, mostly plastic, from Luknay Creek.

Dwight P. Avila, a section head of the TCPI environment and safety division (ESD), noted a very significant drop in the amount of garbage collected, down to less than half compared to the previous year that yielded 2.6 metric tons.

“Our persistent indoctrination of our neighboring communities by working with them in cleaning up Luknay that we adopted had shaped their behavior towards handling waste,” noted Avila.

Luknay Fisherman Association (LFA) members led their neighbors in the activity along with officials of Barangay South Poblacion and the town’s Waste Management Council, plus some policemen and firemen and TCPI employees.

They gathered early morning at the TCPI multi-purpose recreation center with representatives in the region of the Environment Management Bureau (EMB) and Mining and Geosciences Board (MGB), lead agencies of the SOS campaign.

TCPI with the support of Solid Earth Development Corp. (SEDC) gave all participants with souvenir shirts and some cleaning paraphernalia. 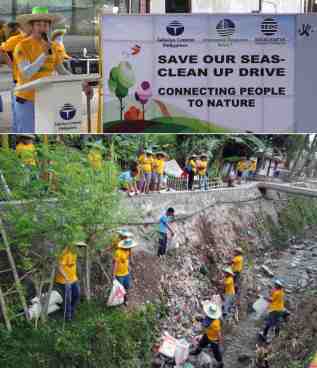 TCPI ESD manager Romeo M. Gebilaguin welcomed the volunteers, as TCPI senior vice president and plant manager Kazuhiko Ichizawa thanked them as he brought to fore the essence of the activity.

“This is not just about picking the trash but putting our heart in what we will be doing. That is loving the environment,” Ichizawa said.

EMB-7 specialist Eng’r. Cindlylyn C. Pepito lauded TCPI for upholding the SOS objectives over the years as she got overwhelmed by the attendance of volunteers who she also praised for their commitment to the environment.

Grouped into four, the volunteers proceeded to their assigned areas – along the creek before the highway, another towards the sea, another at the river mouth, and another at the port area.

Some 150 residents live along the 593-meter lowland portion of the Luknay creek, a major tributary of run-off waters from the uplands of barangays Tonggo and Tinubdan. Rainwaters from SEDC quarry sites behind the plant in Tonggo also run through Luknay.

We communicate.
View all posts by ctepr →

This entry was posted on February 6, 2018 by ctepr in Taiheiyo Cement.